All the passengers on the Rottnest Fast Ferries breathe a sigh of relief as the deckhand passes through the cabin saying, we’ve made it – 2 minutes to go!

It is mid Spring, yet 2016 has been an unseasonable wet and windy year.  Many of us who booked for Rottnest Carnivale months ago would have expected the 45 minute ferry crossing to Rottnest Island 22km off the West Australia coast to be relatively smooth.  Today though, it is like the middle of winter and rough as guts out on the Indian Ocean.

But as soon as we are off the jetty it is all forgotten as we are enveloped in the hype of Rottnest Carnivale.  Oh where to start? 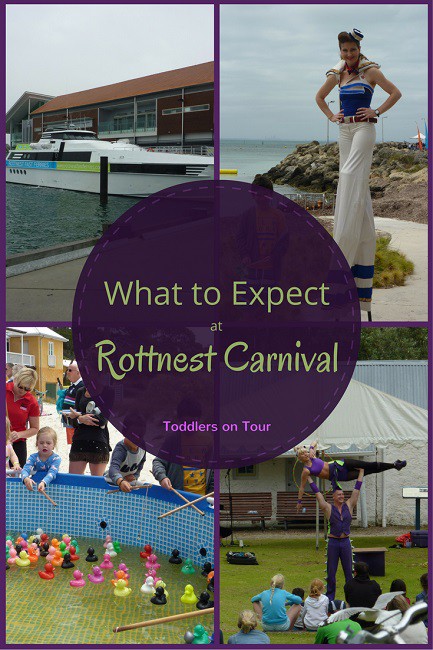 Please PIN this for later.
Just hover over the picture and use the red P button.

What to do at Rottnest Carnivale

We are greeted into the event by a friendly staff member wearing the Rottnest Carnivale orange T-shirt – we see many of these helpful staff throughout the event .  He provides us with a Carnivale programme, a kids treasure map and a wrist band to write our contact details pop onto our son Lewis should he get lost.

The event programme advises us of all the  entertainment and activities – most are free, a few require a gold coin donation to Telethon (a long running West Australian charity for children’s health) and only a couple of others have a small fee. 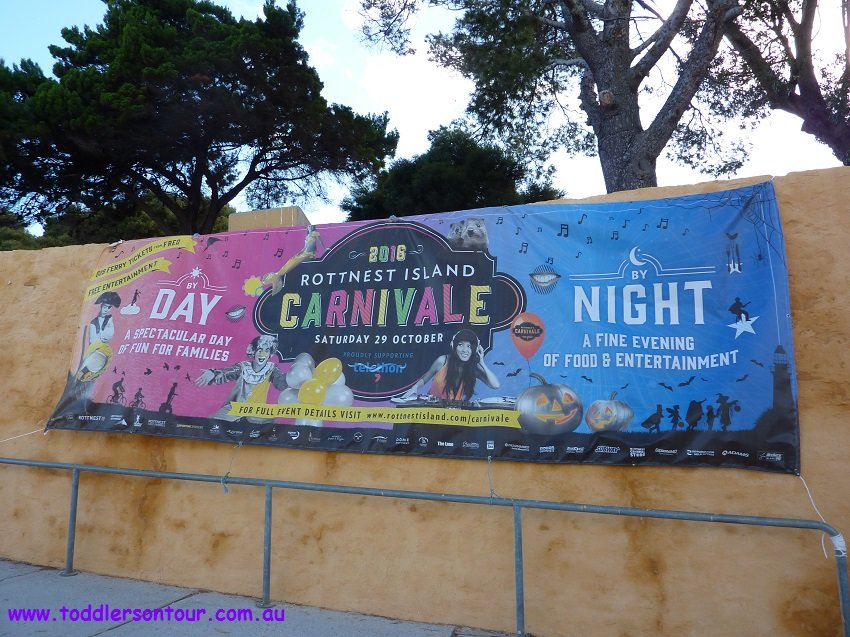 You can also hire a bike for $10/half day, (no cars are allowed on Rottenst Island – only essential services).  However Rottnest Island Carnivale is a busy day and whilst we never feel crowded I noticed it is difficult for those on bikes trying to cycle along with the hoards walking the main streets as they follow their treasure map.

The treasure map requires you to collect 6 stamps from various entertainment and activity zones distributed about from the main settlement, along Thompson Bay and up to the Basin.  We find it a great way to ensure we see all the day’s action.  Plus there’s a chance of winning a prize. 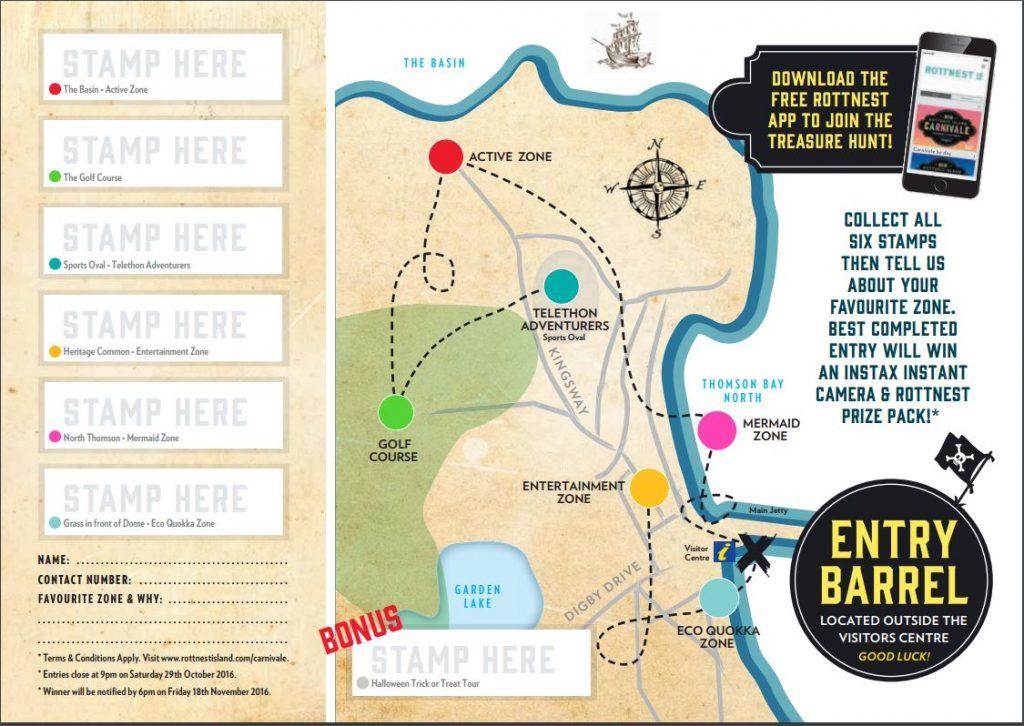 Following the treasure map to each of the stamp locations you will do a lot of walking.  Keep this in mind when you pack your day bags to come over to the island.  I spoke to one mum during the day who had been to Rottnest Carnivale 2015, this year she especially purchased a granny trolley to carry their belongings about for the day.

We took 2 day backpacks.  One with bathers, sarongs and hats.  The other with sunscreen, a water bottle for each of us, snacks for Lewis and the camera.  As the weather was cold when we left home I also included a fold out bag to put our jumpers in once the weather warmed up later in the day.

Walking through the settlement we easily spot the local rat like animal called a Quokka.  Lewis is quite enchanted by them and spends all day pointing them out as they graze under the Rottnest Island Tea Trees.  It has been quite some years since I was last at Rottnest Island, however I don’t remember having seen so many Quokkas before. 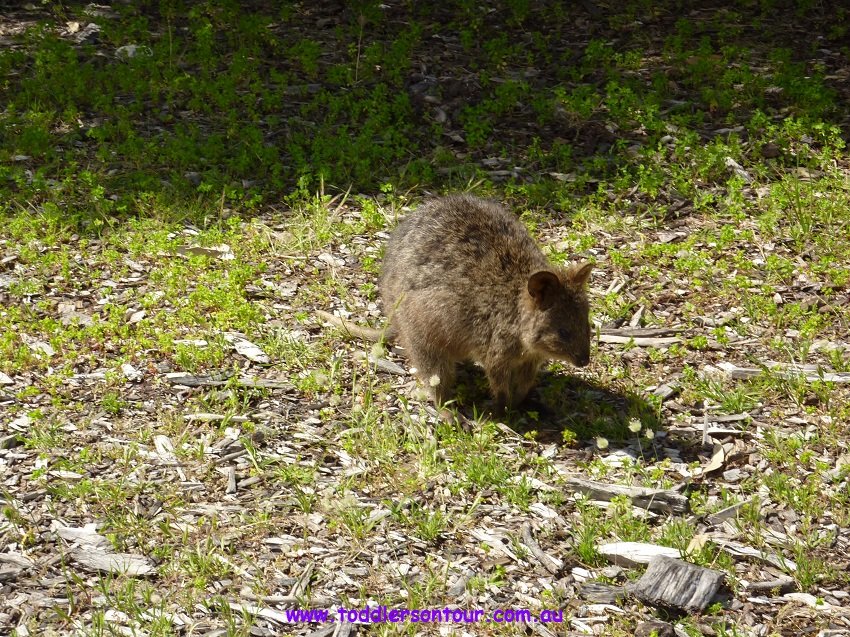 We reach the Entertainment Zone, a small crowd is gathered in the mini amphitheatre watching stunts performed by ZAP Line Circus.  Don’t worry about missing a show because each one is on several times throughout the day, you are bound to catch a show whichever time your pass by. 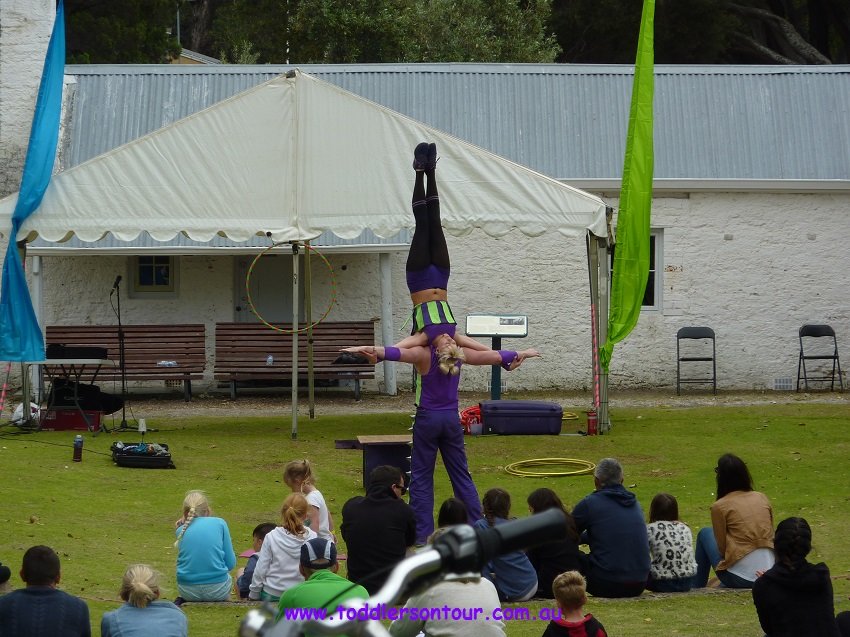 Over at the Eco Quokka Zone I see: young girls having their faces painted, kite making, a birds of prey display, a presentation stage and more. 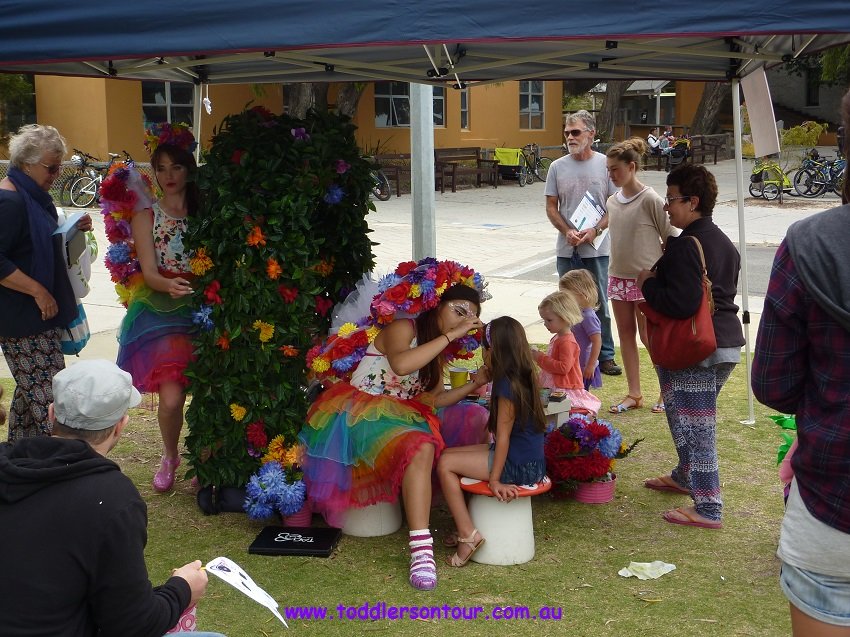 As we meander about trying to locate the stamp booth I listen to the speaker on stage who mentions how new walking trails have been created around the island and they are now trying to grow vegetables on Rottnest Island as they did back in the day when Rottnest was used as a penal settlement. 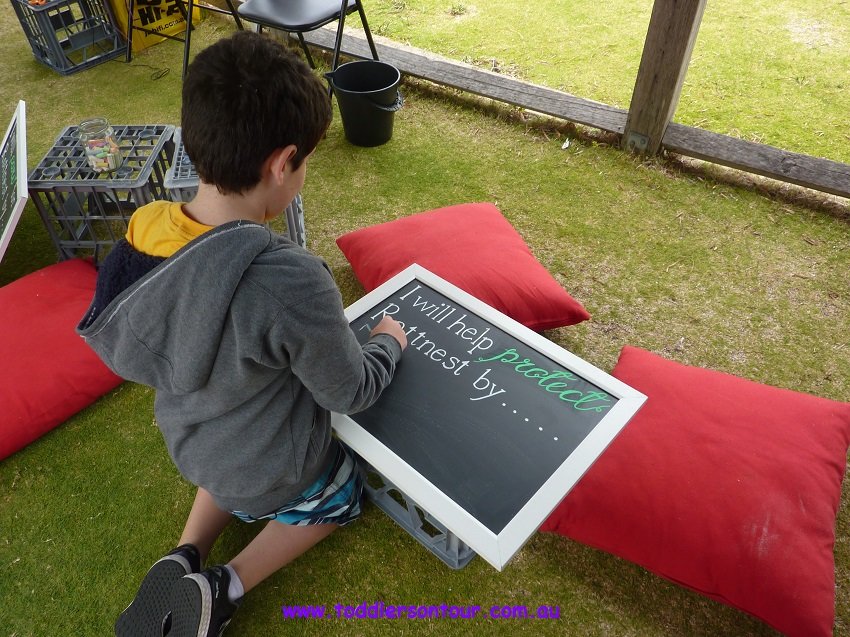 Treasure hunt activity to get stamp.

Try Out the Activity Zones

With one stamp down we are onto the next zone at Thompson Bay.  It is a shame the weather gods have not been kind this year as the Fun Aqua Park would have been…well… fun.  But the “boys” (Lewis and his father) still enjoy checking out the mermaids and having a go at fishing for ducks. 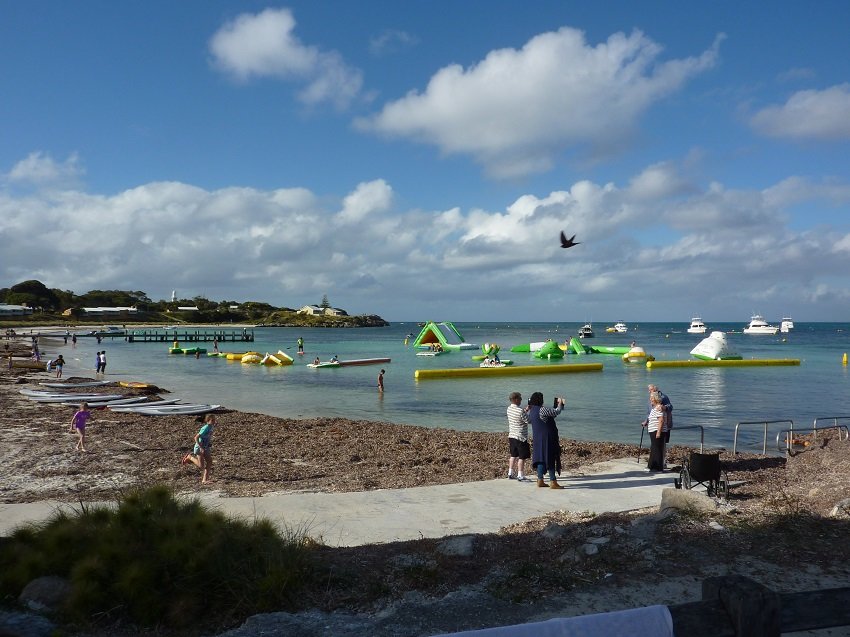 Walking up to the sports oval we find loads of inflatable obstacle challenges.  There’s nothing like a bouncy castle to put a smile on a kids face. 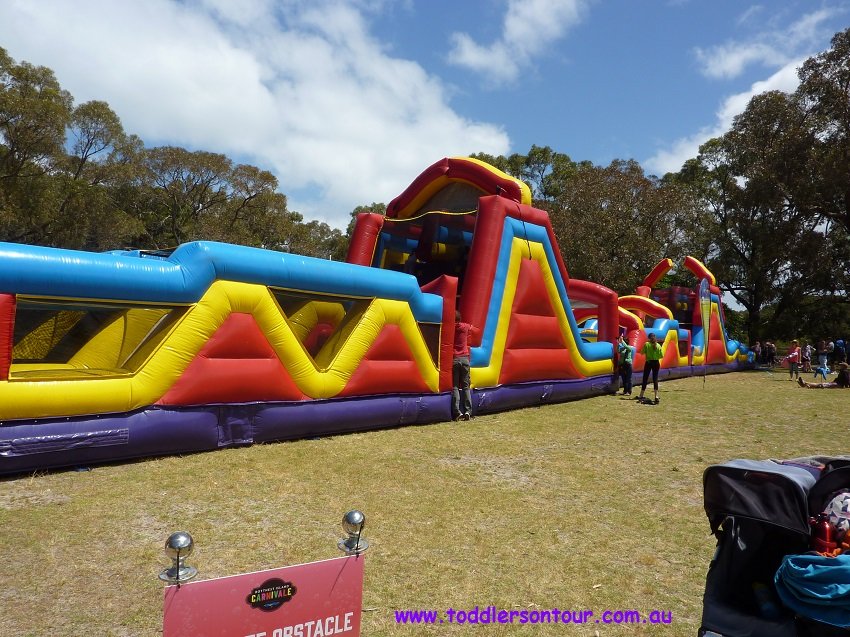 However for us the real highlight is the Archery Tag ($5 for 15mins).  During that short time Lewis masters the art of being able to load and fire his bow, all the while dodging being hit by a bow using the inflatable pillars for protection from the rival team.  Meanwhile I know that he is physically safe as all the participants wear face masks and the arrow heads are made of a flat foam stopper. 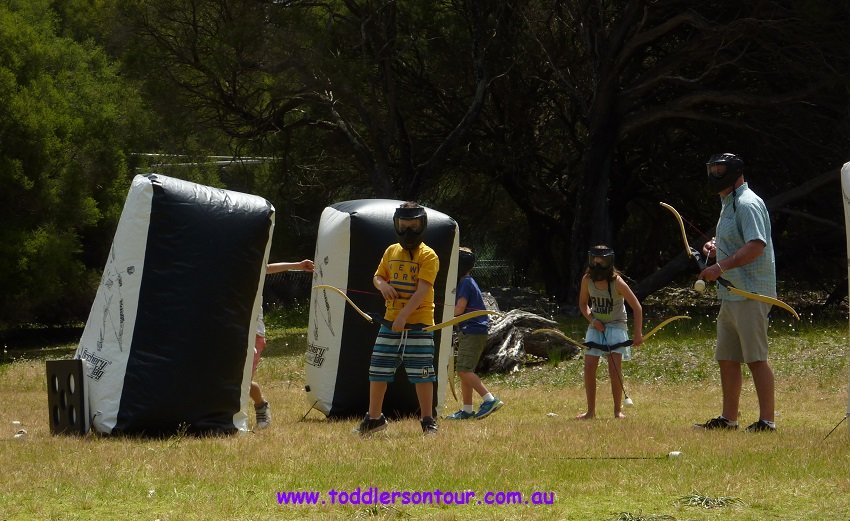 The other top moment for Lewis is putting a few holes at the Rottnest Island Country Club’s golf course to obtain his last stamp for the treasure map. 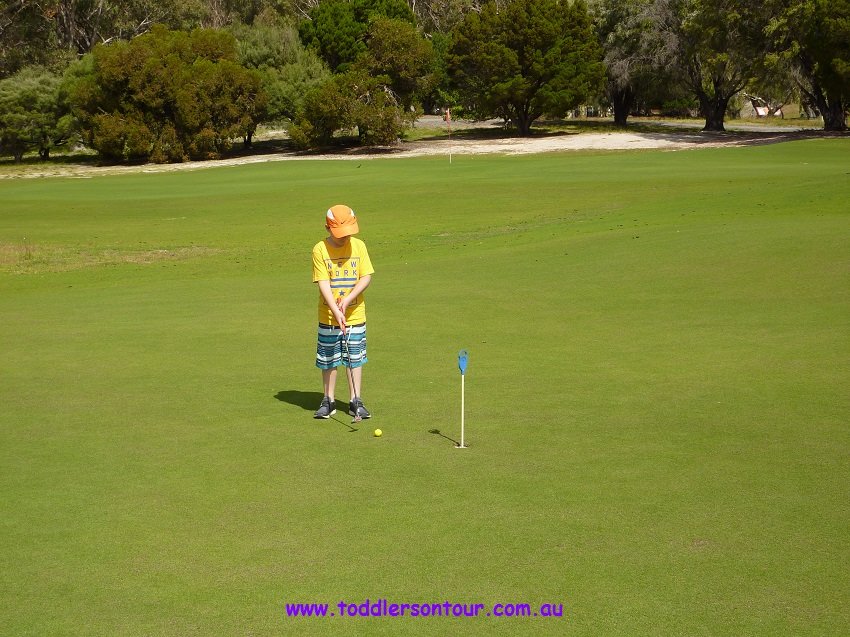 All this activity makes you hungry and there is no shortage of food options on Rottnest Island.  From the upmarket Aristos Waterfront Restaurant over looking Thompson Bay, having a quiet ale at the Hotel Rottnest , a coffee in one of the cafes, buying some snags from the General Store to cook on the free BBQ’s on the foreshore, or indulging at the iconic Rottnest Bakery.

For us it is the bakery.  We have been telling Lewis how tradition is to get off the ferry and head straight to the bakery for a cream bun.  Whilst we didn’t quiet do that, we did have the locally made meat pies, sausage rolls, then later jam donuts and vanilla slice.  Everything we eat is perfect bakery fare; the pastries are short, the fillings gelatinous without being an oozy mess, the deserts fresh and scrumptious. 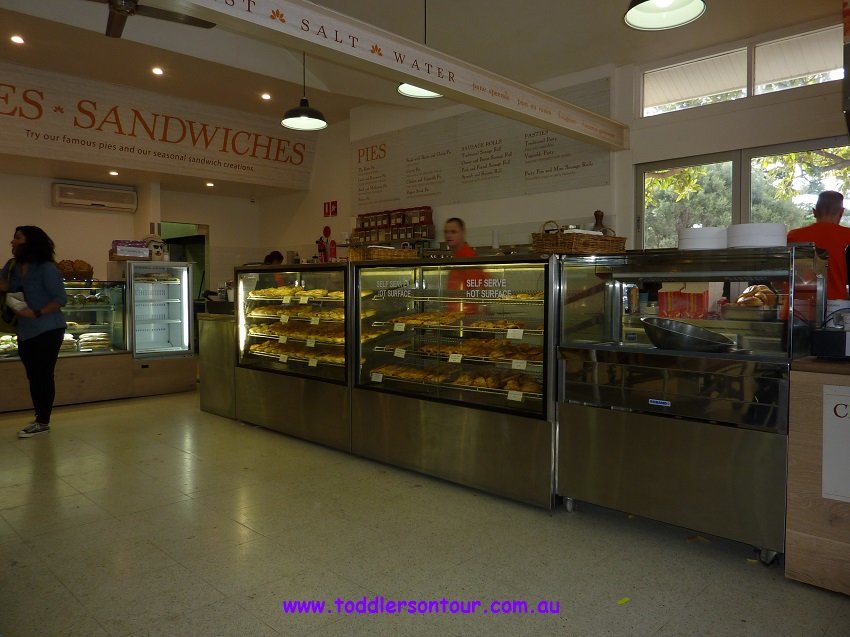 Make Use of the Tours

Having pounded the pavement for a great part of the day we relish hopping on the Rottnest Tractor Train to return us to the settlement village.  We bypass through the ochre orange traditional cottages now used for holiday accommodation, we make our way up to the infamous reef swimming hole – The Basin.  Again it is a shame it is too cold to swim as this is a fantastic spot for young kids to swim due to the reef that protects them from the waves. 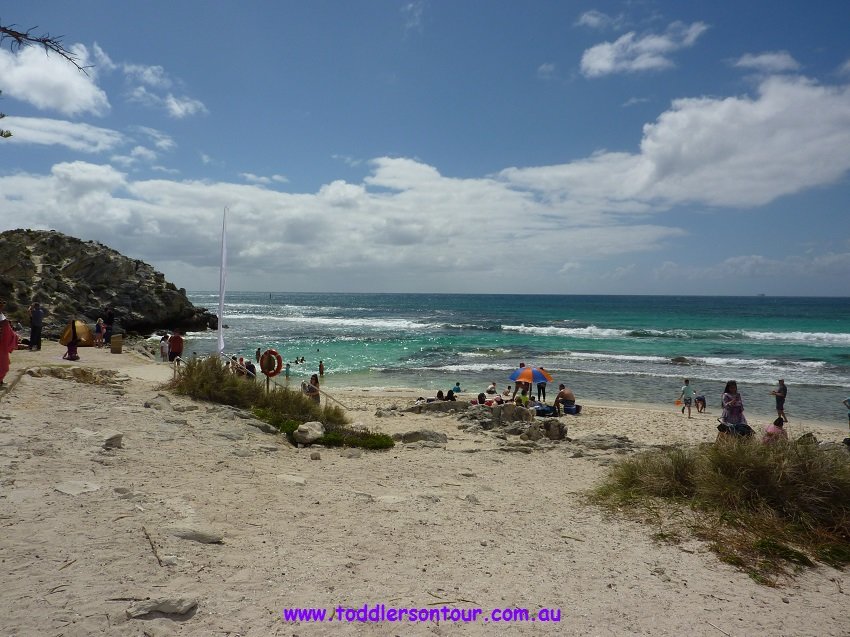 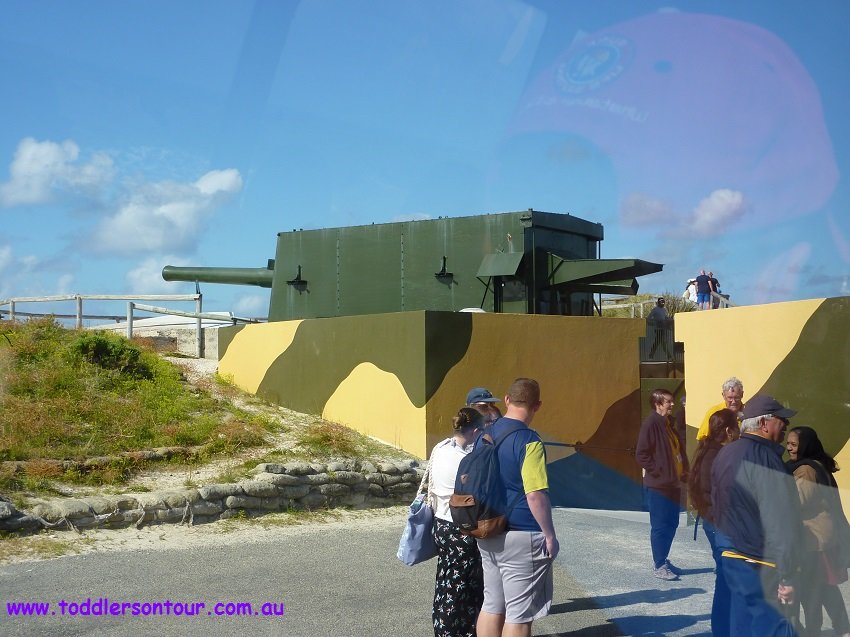 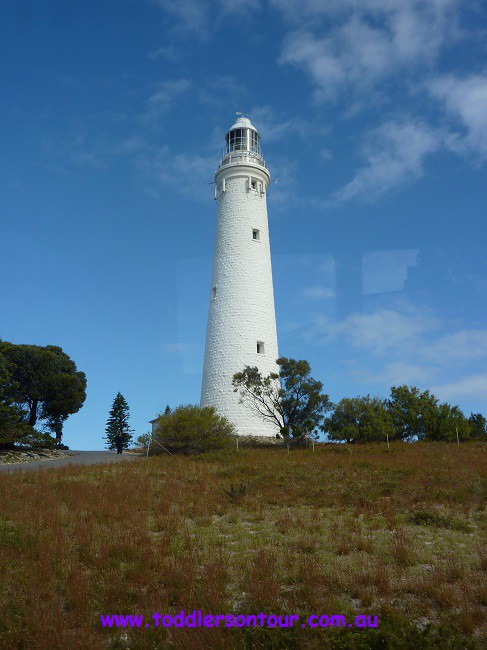 I am a little disappointed that we ran our of time and only wish that there had been accommodation available when I booked our ferry tickets a couple of months prior.

Whilst many of the Rottnest Carnivale activities and entertainment officially finish at 4pm, there is still so much more to see and do on the island.  We could have easily filled in another day with cycling to other parts of the island or utilising the Shuttle Bus, taking a tour on the Rottnest Island Explorer Bus, visiting the museum, enjoying the family fun park and exploring the historic buildings.  If you want any more details about Rottnest Island and places to visit the Tourist Bureau is at the jetty.

Perhaps we will just have to come back for Rottnest Carnivale 2017 on October 28th.

But for us now it’s back on the ferry to Perth.  We are fare-welled by the colourful Rottnest Carnivale band and fortunately this crossing is nowhere near as rough as it was coming over. 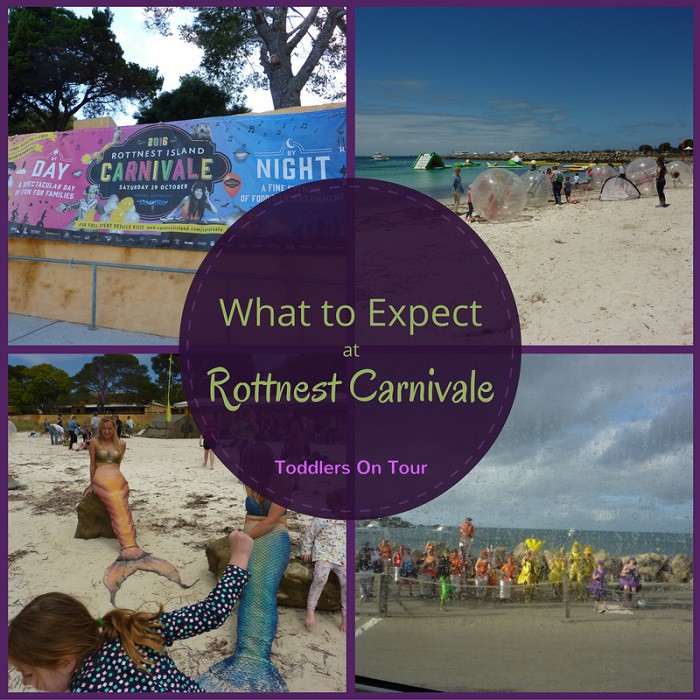 *DISCLOSURE: We were provided with the ferry tickets to Rottnest Carnivale 2016 by Rottnest Island.

If you would like to keep up with all our day trip adventures and get inspiration for your own family escapades please sign up for my monthly e-newsletter.

This site uses Akismet to reduce spam. Learn how your comment data is processed.

6 thoughts on “What to Expect at Rottnest Carnivale” 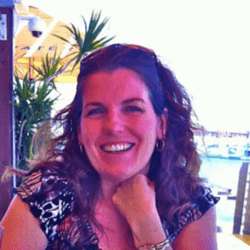 I am Sally-Ann, I am a wife, mother and travel blogger/writer with 20+ years experience in airlines, hospitality and tourism. I love sharing my family travel lessons learned to help you have a better family holiday with my travel tips for travel with kids.Click if you would like to know more about me and what lead me to here. 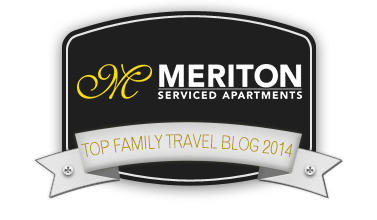 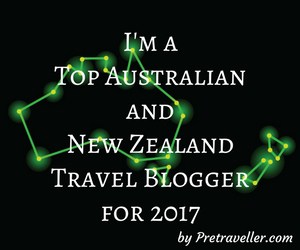 Travel Tips Straight to Your InBox

We use cookies to ensure that we give you the best experience on our website. If you continue to use this site we will assume that you are happy with it.OkRead more